Two young documentary filmmakers, Sheila Sofian and Nicholas Kleczewski, are seeking support to help bring their projects to completion.  Both projects -- Ms. Sofian's TRUTH HAS FALLEN and Mr. Kleczewski's SEALED FATE -- address the issue of wrongful conviction.  DNA has forced the American public to admit what police, lawyers and judges have always known, that innocent people are convicted every day.  Ms Sofian and Mr. Kleczewski go beyond the laboratory exonerations, however, and expose the roles of witness perjury, police and prosecutor misconduct, and "tough on innocence" judges.  Here, in their own words, these filmmakers share their visions, and offer us the opportunity to become part of it. 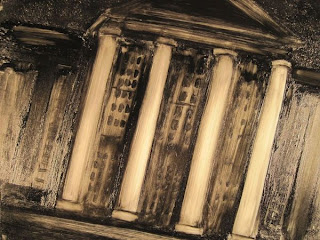 For over ten years I have been working on the film “Truth Has Fallen,” an animated/live action documentary about wrongful convictions. This film examines the cases of three people who were convicted for murders they did not commit, and highlights weaknesses in our justice system. Painted animation expresses the fury and grief of their testimony, and represents their version of events. Surreal live action film portrays the experts’ testimony, providing a more detached perspective. “Truth Has Fallen “ exposes causes of wrongful convictions, such as the inaccuracy of eyewitness identification, the unreliability of “snitch” testimony, and forced confessions. Experts advocate for relatively simple changes to our justice system in order to reduce the rate of wrongful convictions. A massive undertaking, I have so far animated over 30 minutes of footage in 7 years (over 22,000 individual paintings.)

Please consider supporting this film. After all these years the animation and live action has been shot. I need to raise the money to hire a composer and sound editor, and for post-production lab expenses in order to take this film to the finish line.


You can view the campaign HERE, which includes a trailer of the film.  A Longer trailer is available HERE.   For more information on the film you can check out the website: TruthHasFallenMovie.com

Thank you for your support! -- Sheila Sofian

I'm Nicholas Kleczewski a full time editor and documentary filmmaker. I'm not one for talking about myself much, but as a constant kickstarter backer myself, I know how important establishing legitimacy to a project can be. I've directed and or edited seven feature documentaries, worked directly with big music artists like Beyonce, Tina Turner, Pink, etc, my films have appeared in over 40 film festivals worldwide and I've won numerous awards including the Audience and Grand Jury Awards for Best Documentary at Slamdance which runs during the Sundance Film Festival. Some of the other festival wins with my work is shown below. My latest reel as a commercial director/editor can be found at www.trsociety.com.

SEALED FATE is a feature documentary about two Navy SEAL trainees who were convicted of one of the most famous murders in Hampton Roads Virginia history. The case was highly publicized and quickly became a media frenzy. The film follows the news reporting of the time but also goes deeper with interviews, footage, reenactments, facts and analysis from everyone involved with the case. Not only is the case covered in great detail with everyone involved but it is also gives the audience a closer look into Navy SEAL training and culture than nearly any film has shown before due to unprecendeted footage access at BUD/S, the Navy SEAL training program. But like any great documentary, what seems to be just a retelling of a notable story from the past quickly transforms into something much more. We don't want to give that away completely, but since we are asking you to invest in this project we will say that as you can see in the promo trailer above, things are not as they seem, who's guilty, who isn't, who was motivated for personal or political gain and who just wanted justice no matter the cost quickly come to light and by the end the audience will have a whole different take on the story then when it began.

I've launched a kickstarter project to help raise funding to complete the long in development film and all the info you could ever want to know and a trailer can be found at: SEALED FATE

Thanks so much for your support! -- Nick Kleczewski
Posted by Truth in Justice Files at 3:33 PM

I think that your blog is really nice! The content is really useful
Keep up with The excellent posts.